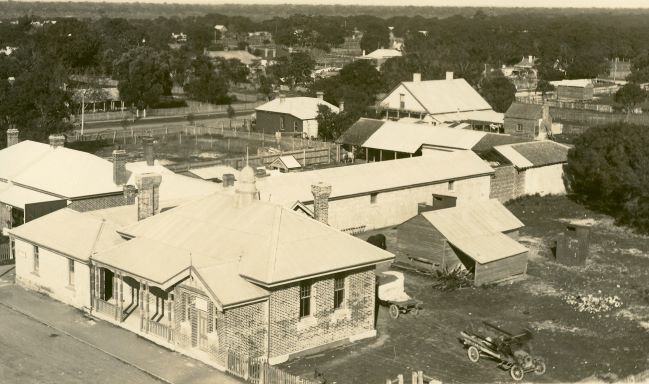 During the Colonial and early Federation eras this heritage-listed complex was the most important public building in the district, providing law and order, governance and telecommunications.

The original Courtroom and the Bond Store was built in 1860 by David Earnshaw - inn keeper, local builder and one of the first policemen in Busselton. After building a lock up at his house, which was located near Strelley Street and Fairlawn Road he became known as the first gaoler. The Courtroom would have been sparsely furnished with a table and chairs. Once the new Courtroom was built in 1897 the old Courtroom was used as the office for the Government Land Agency, it later became part of the Police Station.

The Bond Store was also built in 1860 by David Earnshaw and was used by Customs and Excise to store dutiable goods brought from ships moored at the Busselton Jetty on a tramline by push-pull carts (Kalamazoo). A Customs Officer, also known as a Tide Waiter, supervised the landing and storage of goods in the Bond Store until the appropriate tax or excise duty was paid. These goods included tobacco, wine, spirits, dried fruit, potatoes, rice, canvas, mineral oils and salt.

Police were kept busy with charges of disorderly conduct in public places, obscene language, assault, drunkenness and vagrancy, for this later charge the modern equivalent is being poor and homeless. Members of the public entered from Marine Terrace to speak to the duty constable who recorded information and incidents in the Occurrence Book. Benjamin Sutton, was a Police Constable here. He was born in September 1850 a few months after his parents arrived aboard the Scindian, the ship that brought the first consignment of convicts sentenced to transportation. Sutton joined the police force in January 1874 and accompanied explorer/surveyor Sir John Forrest and party to Geraldton, where Forrest began the first west-to-east expedition through the western centre of Australia. In 1879 Sutton was transferred to Busselton where he lived in one of the police cottages next to the Courthouse, with his wife Margaret and seven of their children. 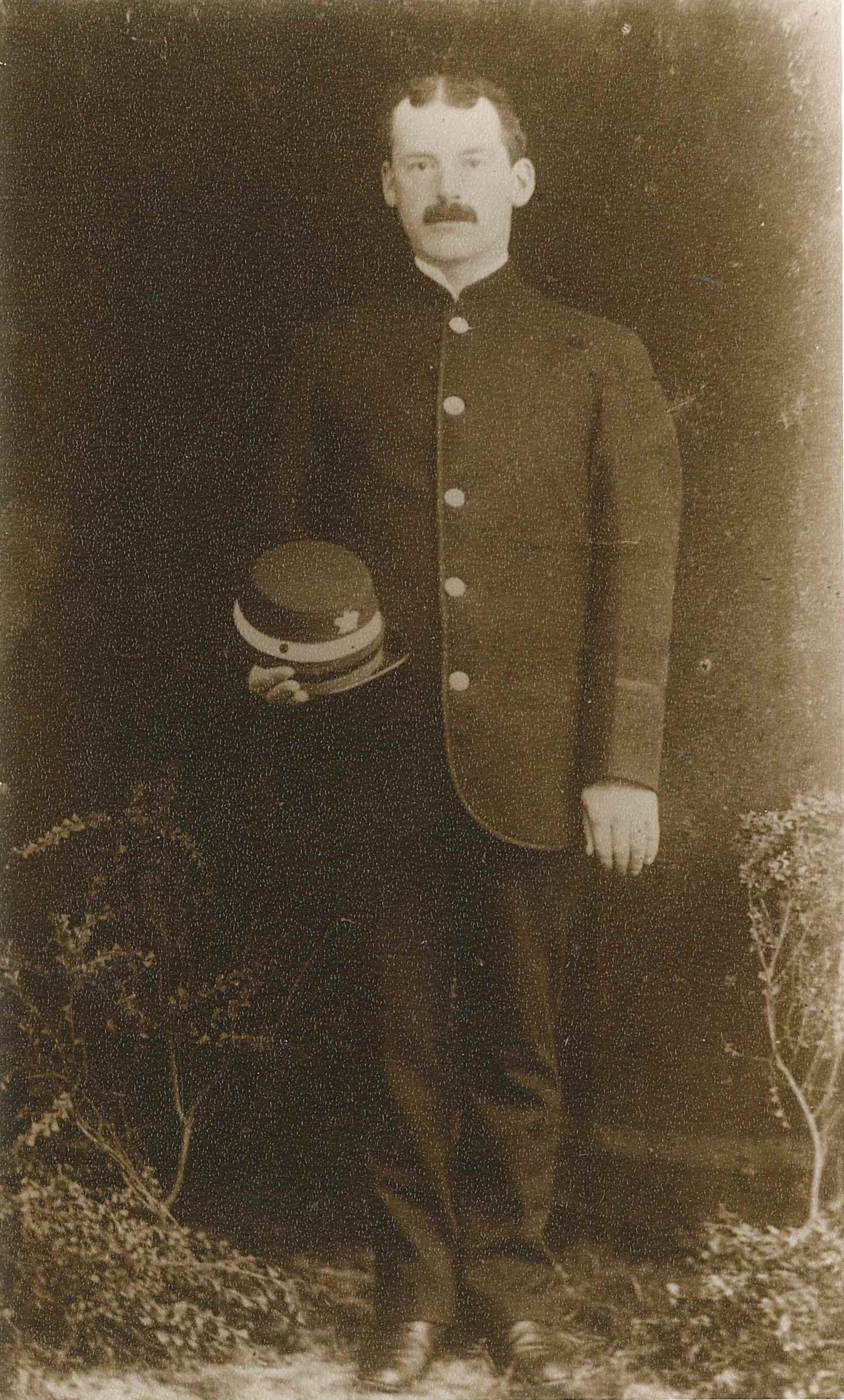 There are 8 small cells which were for British/European prisoners. The large cell (beside the exercise yard) was for Indigenous prisoners. Not long after the cells were built, a prisoner - John Williams - escaped by digging through the soft limestone wall with his hands and pulling the iron barred window out. Four of the small cells walls were then lined with jarrah boards and obviously used to house what was considered the worst offender Prisoners would spend up to 9.5 hours locked in the cells at night. Prisoner food was very basic – bread and tea for breakfast and dinner, meat and potatoes for lunch. The policeman’s wives did the cooking for the prisoners but it was the police officers who were paid the extra allowance of 3 shillings and 6 pence! In today’s money that is 36 cents!

The two original Police Cottages built by Henry Yelverton in 1861 were made of limestone blocks. As the original cottages were deemed unsuitable for married men with families, two new brick cottages were built by William Rose in 1906. The cottages comprised of a sitting room, living room, two bedrooms, kitchen, bathroom, pantry and front and back veranda. These were occupied by the Police until 1981.

The stables, now resident artists’ studios, housed police and mail delivery horses. The stabled horses were used for special duties, such as escorting settlers or prisoners, or tracking down missing persons. Documentation was kept for each horse as they were an important part of the Police Service - for example the name of each horse, distances travelled in a day and food allocation. Bessie, Betty, Bota, Cross Keys, Doctor Friday and Higgins were but a few of the horse names. The Fodder Room was used to store hay for the horses and is now a workshop space.

In 1873 Samuel Rose built the Post and Telegraph Office after the completion of the telegraph line which ran from Perth to Bunbury and Busselton. The office was entered from Queen Street and was completely separate to the Courthouse operating until 1898 when new premises were built in Prince Street opposite the then Railway Station. During restorations in the 1980’s a connecting doorway was built from the Post Office into the Magistrates Retiring Room.

A new courtroom designed in the Federation art and craft style by the Western Australian Government architect George Temple Poole was constructed in 1897 by Christopher Hough and Robert Donald. By 1980, 34 of the 200 buildings Temple Poole designed were classified by the National Trust of Australia including Perth’s Treasury Buildings, Royal Mint and Railway Station, Fremantle Prison and Fremantle Art Centre. The timber used within the courtroom is Jarrah the Aboriginal name for the wood which was called Swan River Mahogany by the Europeans. 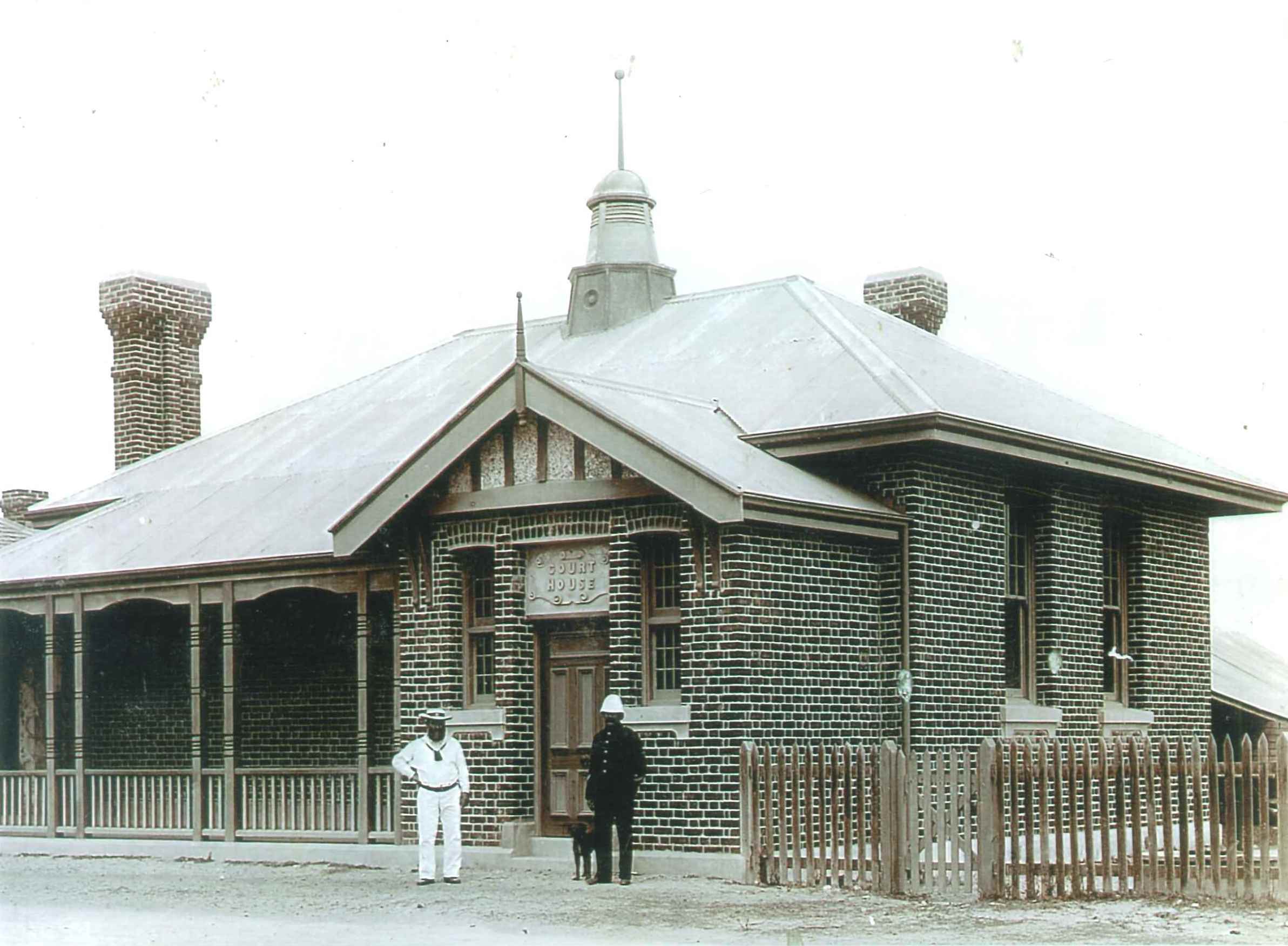 Constable Edward Tonkin & Corporal George Buck, 1898. Image Credit: Val MacDonald
The Court addressed lower scale crimes eg. theft, drunk and disorderly. Sentences were generally between 1 to 10 weeks although often the sentences included hard labour, working on the roads or the buildings during the day. More significant crimes such as major assault/murder, usually ended up via Bunbury or sent to Perth and detained in Fremantle prison. However the indigenous prisoners were transported to Rottnest Island.

Busselton’s population in 1839 was 77 people, warranting an appointment of a resident magistrate. Captain John Molloy became Busselton’s first Resident Magistrate from 1839 to 1861, and before the Old Courtroom was built district court sessions were held at Fairlawn, his private residence which is now a function centre. In 1855 Molloy carried out the preliminary hearing of Busselton resident Bridget Hurford the first woman to be executed in Western Australia. Bridget was also the first person to be executed at the new Perth Gaol (which was situated on the rise at Beaufort and Francis Streets. Bridget was found guilty of murdering husband John Hurford.

The Courthouse Complex remained fully operational until the Justice Department vacated the buildings in 1976.