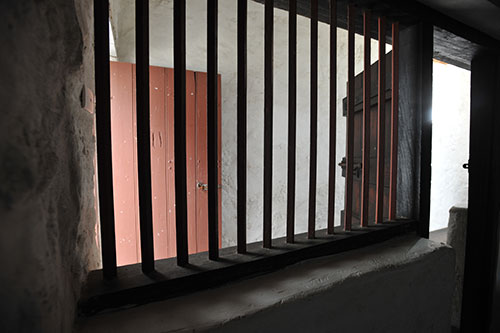 Busselton's historic Courthouse was an important regional administrative centre and judiciary during the Colonial and early Federation eras.

The earliest limestone structures dating from 1860–61 include a courtroom and bond store where goods transported by horse-drawn wagons from Busselton’s famous jetty were warehoused. The Old Courtroom is now a retail outlet for regionally-made art and crafts from the South West and Great Southern.

The Courthouse lock-up built by Henry Yelverton (of Busselton jetty fame) in 1861 is a cold, dismal corridor of gaol cells where prisoners charged for crimes like petty theft, vagrancy, wife beating or drunk and disorderly conduct were confined. Magistrates presided over court proceedings, so no capital offences were heard in Busselton and sentences were usually short. But the cell with bars and shackles evokes an era when Aboriginal people were subjected to particularly harsh conditions.

The brick and timber courtroom designed by George Temple Poole and built in 1897 is a fine example of Federation-era arts and crafts architecture. Nowadays, the New Courtroom’s superb acoustics and original furnishings – magistrate’s bench, clerk’s desk, witness stand, dock and public gallery, all made for local Jarrah – provide a distinctive venue for live performance and role-playing.

The Courthouse remained fully operational until the Police Department vacated the buildings in 1976.

Despite classification by the National Trust in 1972, the site fell into disrepair until some artists decided it would make a suitable venue for their activities.

Entrusted to the Shire of Busselton in the mid 1980s, repair work began. The site was heritage listed in 1993 and the Courthouse continued to operate as an art centre under various lease agreements until the Shire resumed management of the entire site in 2003.

Although the Courthouse still operates as a venue for exhibiting and retailing arts and crafts, in recent years revealing the site’s architectural, historic and social significance has become a priority including plans for engaging site interpretation include storytelling through contemporary media and live performance.